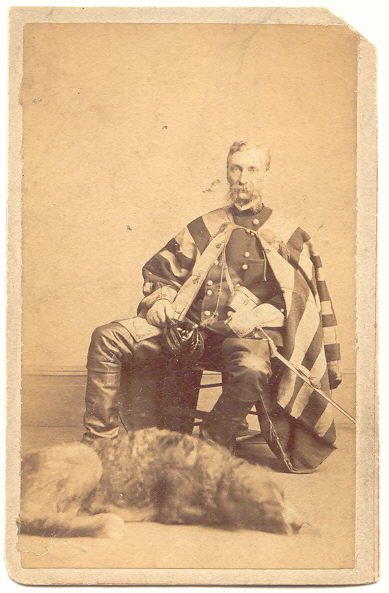 Alexander Sandor Asboth was born in Hungary on December 18, 1811. He graduated from the academy at Selmechbanya and then worked as a government engineer throughout Hungary. During the Hungarian revolt in 1848, Asboth sided with the losing side and exiled himself to the United States in 1851. By 1861, Asboth was an official U.S. citizen and offered his services to the Army. General John C. Fremont attempted to give Asboth the rank of brigadier general of volunteers and his chief of staff but Washington D.C. never recognized the commission. By February 1862, Colonel Asboth commanded the 2nd Division of the Army of the Southwest under Franz Sigel and the overall commander, Brig. Gen. Samuel Curtis. During the first day of the Battle of Pea Ridge, Asboth’s 2nd Division began at the Little Sugar Creek fortifications where Curtis expected the brunt of the attack to come. After Curtis realized the attack was being waged from the north, he sent Asboth with four companies of the 2nd Missouri and four six-pounder guns of the 2nd Ohio Battery to aid Carr at the Elkhorn Tavern. After arriving at the Tavern, Asboth formed his men in line to the west of the Telegraph Road. During the intense fighting around the Tavern on March 7, Colonel Asboth was struck in the right arm by a bullet or canister ball but refused to leave the field and continued to direct his troops for the remainder of the fighting. On the night of this first day of battle, Asboth set up a line to the south of Ruddick’s field next to Colonel Carr’s troops. During the course of the night, Asboth requested a council of war with Curtis and attempted to talk the other commanders into the idea of retreating from what he saw as a hopeless situation. The only commander Asboth succeeded in persuading that the battle was hopeless was Franz Sigel, the Federal Army’s second in command. Despite Asboth’s misgivings, Colonel Asboth and the Federals won the battle on March 8. On March 21st 1862, Asboth was promoted to the rank of brigadier general. In 1863, he led troops at Columbus, Kentucky and later commanded the district of West Florida where he was wounded in the cheek at the Battle of Marianna. After the Civil War, Asboth was appointed the United States’ minister to the Argentine Republic and Uruguay. On January 21, 1868 while in Buenos Aires, Alexander Asboth died of complications from the cheek wound he received during the Civil War. He is buried in the cemetery in the Chacarita District in Buenos Aires, Argentina.