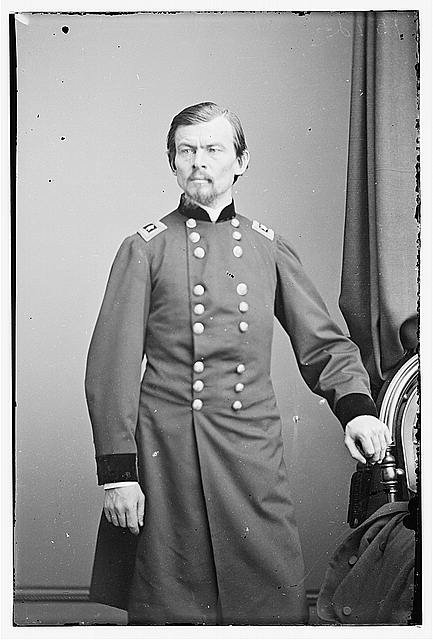 Franz Sigel, born November 18, 1824, was a native of Baden, modern day Germany. He was educated at the Karlsruhe military academy. In 1852, Sigel left Europe after participating in the failed German revolution of 1848. During his time as the military leader of German revolutionaries, Sigel made a name for himself as a man who fought for liberal values and politics. Sigel was forced to flee the Germanic states for his roles in these events and would eventually make his way to the United States. Sigel became a popular German-American leader and became an avid Unionist during the secession crisis. Through his influence, hundreds of German-Americans rallied to the Union army. In early August 1861, the Union army in Missouri, under the command of Nathaniel Lyon, engaged Confederate and Missouri State Guard troops at Wilson’s Creek. Sigel, a brigade commander, was routed. The Union’s defeat and Sigel’s actions dampened the colonel’s sterling reputation. By late August 1861, Sigel was promoted to brigadier general mainly for his usefulness in rallying Missouri Germans to the Union cause. February 1862 saw Brigadier General Franz Sigel and the Federals under Curtis, known as the Army of the Southwest, chase the Missouri State Guard all the way into Arkansas. Curtis entrenched some of his troops near Little Sugar Creek and spread the rest out to forage with Sigel a few miles west of Bentonville. On March 4, Major General Earl Van Dorn, overall Confederate commander, moved his Southern army north from Fayetteville to engage the Federals. Confederates chased Sigel and his men out of Bentonville, forcing them to regroup with Curtis around Little Sugar Creek. Curtis expected the Southern armies to come from the south and framed his army around his entrenchments. Van Dorn split his army into two divisions, one to maneuver around the Federals to the west and north and then attack Curtis’ rear around the Elkhorn Tavern and the second to move eastward along the Ford Road. By the end of the first day of fighting on March 7, the Federals had won at Leetown but were forced to push southward from the fighting at the Elkhorn Tavern. Sigel did not play much of a role during the first day’s fighting at the Battle of Pea Ridge. On the morning of March 8, Curtis opened the fighting with an artillery barrage on Van Dorn’s position in the woods just south of the Elkhorn Tavern. Sigel was commanded to direct the assault against the Southern line and used the 40 Federal guns in his line to bombard the Southerners for over two hours. When the Federals advanced on the Southern line, the hard-pressed Southerners began a hasty and uncoordinated retreat to the north and east. This would be Sigel’s most positive moment during the Civil War. After the Battle of Pea Ridge, Sigel came down with a severe case of influenza and confined himself to his home in St. Louis until mid-May. Officials in Washington D.C. then called Sigel out to the East and he spent the rest of the war participating there. After the war, Sigel spent much of his time campaigning for republican politicians, such as Ulysses S. Grant, and as publisher and editor of several German American newspapers, newsletters and periodicals. Franz Sigel died on August 22, 1902 and is buried in Woodlawn Cemetery, New York City.