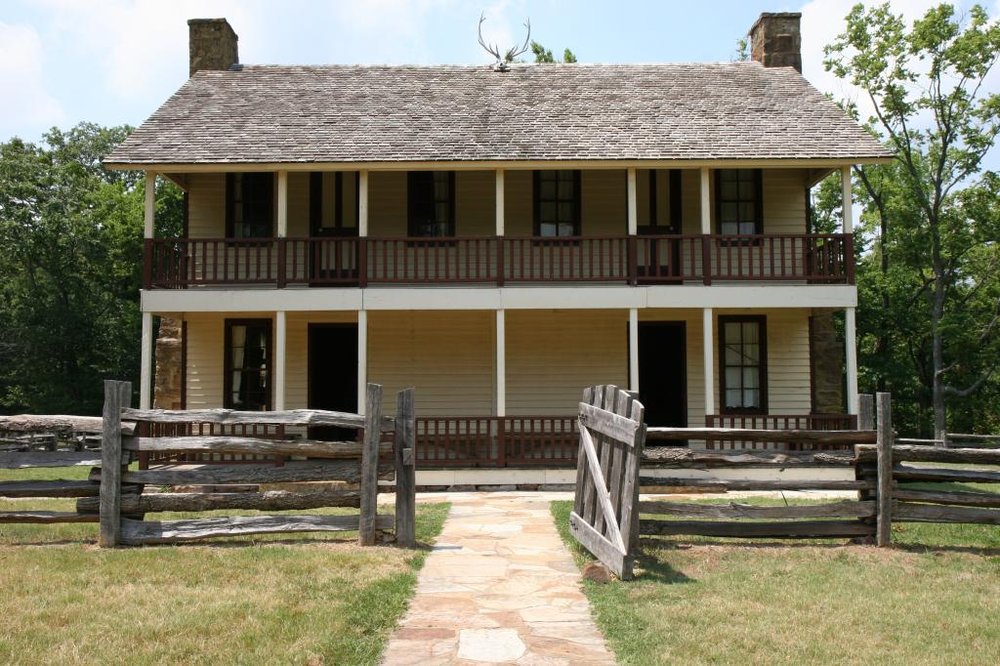 History of Elkhorn Tavern The Battle of Pea Ridge, known as the Battle of Elkhorn Tavern by the Confederates, centers around the events that occurred around the tavern in March of 1862, although the site has a longer history. William Ruddick and his son-in-law Samuel Burks are believed to have built a two story log structure on this site around 1833 as a private residence, although the exact year of construction is unknown. In 1848, Sylvanus Blackburn built a sawmill on War Eagle Creek, thus allowing sawed lumber to become available to the residents of this area for the first time, which Ruddick used to finish the building with plank boards. Jesse Cox purchased the building from Samuel Burks, William Ruddick’s son-in-law, in October of 1858. The Cox’s operated the tavern as a place to vote, a trading post, a meeting place for the local Baptist Society group, and a rest stop due to their proximity to the Wire Road, Huntsville Road and Ford Road. The Butterfield Overland Stage Coach stopped at the tavern on its way to and from San Francisco, California and Tipton, Missouri to allow horses and passengers to rest and eat. This stagecoach made the trip from Tipton to San Francisco twice weekly from 1858 until the beginning of the Civil War in 1861. Other stage coaches also passed by this site coming and going on the many roads in this area, bringing news, people, mail and revenue to the Cox family’s tavern. Other travelers on the Telegraph-Wire Road coming and going from Arkansas used the Elkhorn Tavern to rest, eat and possibly, to buy supplies. The Battle of Pea Ridge saw the Elkhorn Tavern used as headquarters by Major Eli Weston, Provost Marshall to Curtis’ Union army, as headquarters by Confederate Major General Earl Van Dorn, as a hospital by both sides and as a staging ground for the battle. The fighting around the Elkhorn Tavern between the Federals, led by Colonel Eugene Carr, and the coalition of Missouri State Guard troops led by Major General Sterling Price and Confederates led by Major General Earl Van Dorn would be known for the fiercest fighting of the battle. Confederate guerrillas burned down the tavern in January 1863 after the Union Army moved telegraph operations back to Missouri. Given to the Cox family by a neighbor and the reason the building was nicknamed the Elkhorn Tavern, the Elk horns from the roof’s ridgepole were supposedly taken by Federal Colonel Eugene A. Carr sometime after the battle. Through the efforts of the journalist and artist Hunt P. Wilson, the Elk horns were reportedly given back to the Cox family sometime after the war. Joseph and Lucinda Cox rebuilt the tavern in 1865. Until the National Park Service acquired the property in 1959, Cox family descendents remained living in the Tavern and made multiple improvements and renovations to the building. The Park Service built the modern tavern in the 1960s based on sketches and pictures of the tavern as it was in the 1880s. This reconstruction is believed to be very similar to the structure of the tavern at the time of the Battle of Pea Ridge. One important structural difference between the two versions of the tavern is that at the time of the battle, the tavern is believed to have had a dogtrot or breezeway in the center of the building, separating the two rooms on the first floor. The modern reconstruction of the Elkhorn Tavern is a significant part of the Pea Ridge National Military Park experience. The Tavern represents many aspects of the battle of Pea Ridge, including military tactics and strategic decision making, as well as the medical issues experienced by civilians and soldiers during the battle. It also represents what the Union considered the most significant battle west of the Mississippi. The Confederates considered the fighting around the tavern to be the most significant aspect of this fighting and named the engagement the Battle of Elkhorn Tavern. The Elkhorn tavern also represents mid-nineteenth century culture and family life because it is the one physical representation on our park of the way a family is this area would have lived and experienced the battle that occurred here. Thank you for visiting the Elkhorn Tavern.